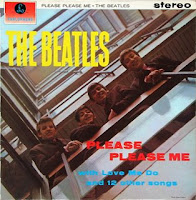 THE SHORT STORY (for Experts)

There is a marked difference between masters. UK Mastering is "wetter" than one specific German Stereo master (dead wax information SHZE-117-A-2/B-2). You need both, although it's said that once you hear the latter you will never again desire the former. Full details below.

Both US versions (Vee-Jay and Capitol) were abridged. The Early Beatles has extra reverberation.

Misnomer. "UK Mastering" applies to many other worldwide releases, including the first German lacquer.


Distinguishing Marks. As documented on the tape box (pictured on the MFSL album cover), UK Mastering used a certain amount of additional EQ and/or compression. The "Specific German Mastering" lacks some of this post-processing, as detected by comparisons on reverberation (this "echo" is an illusion caused by the extra compression).

Intent. This “wet” UK Mastering appears to have taken place as the UK LP reel was mastered for lacquer. The reason seems to have been to equalize the sound quality throughout the album, some songs having apparently been too “dry” for George Martin’s taste. Whether in hindsight we wish to say that the “wetness” was a good or a bad decision, it has in any case given us two distinct listening experiences. 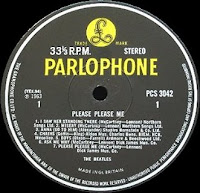 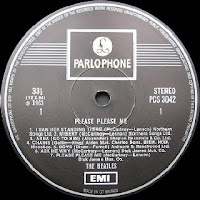 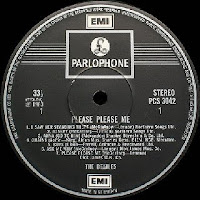 Lacquers remain TC, -1/-1 until P9, which is the final -1/-1 lacquer and the only two-box with that lacquer (look for “Made in Gt. Britain” printed beneath the lower “EMI” box).

Yellow & Black is often found in worn condition or overpriced (the high price parameter reflects rare early pressings, which are not necessary even for audiophiles). One-box is easier to find in excellent condition and is less expensive (bang for the buck). Two-box is harder to find with -1/-1 lacquer.

The mother changes to "2" about P6, so that is a window of opportunity for a “hot stamper” to be discovered. 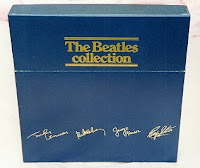 General Information. This was a worldwide release. A two-box, later lacquer Please Please Me LP is most commonly found inside the box. This is more than adequate for most listeners.

Sonic Information. UK is considered the best pressing, followed by Germany, Sweden and New Zealand (experts may differ). "HTM" in the dead wax makes this jump from *** + to *** ½, or about 80-90% of TC sound. 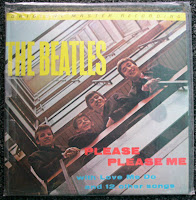 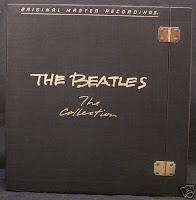 Many swear by MFSL. Sonic experience is actually variable.

(1) If you thought the Mono issue of Introducing the Beatles was rare and expensive, try seeking out the Stereo (Vee-Jay SR-1062). In any event, this release is incomplete (12 of 14 songs). More general information: here.

(2) The Early Beatles Stereo LP (Capitol ST-2309) is incomplete (11 of 14 songs) and has extra reverberation, making this source actually full of Variations, and not a replacement for Please Please Me.

(3) The Stereo Japanese red wax edition has, to my ears, inferior sound, and is thus not an acceptable substitute for rated sources. 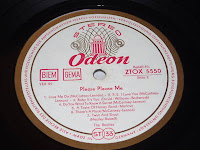 Sonic Identification. The Specific German Mastering is a “dry” master. It lacks the extra compression which was applied to the UK master, and, consequently, some of the tracks here have somewhat less perceived reverb, and a natural quality that makes it seem as if you’re in the studio with the boys. Excellent tonal features and lots of “air" on those affected tracks. To hear some comparisons between Die Beatles and other releases, click: here.

Note that the UK LP does not use the feared “modern digital compression” but the “warm gushy kind of compression” and it's the way The Beatles, or at least George Martin at this point in their career, wanted it to sound, not to mention the sound that listeners first heard and loved in 1963. The German LP is thus an addendum to, not a substitute for, the UK.

Intent. It would appear to be obvious, since there was a first German Stereo lacquer (“-1”) which sounds rather like the UK Mastering, that processing instructions had been sent to Germany along with a dub of the UK production master, and that these instructions had been initially followed. But, when it came time for the reissue on the Hör Zu label, a new lacquer (“-2”) was cut (from the same production master), and it seems just as obvious that the processing instructions were then ignored. Now, whether this was done accidentally (oversight) or deliberately (the mastering engineer decided to make his own Beatles record, for whatever reason), I do not know. 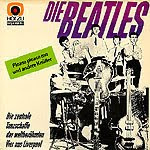 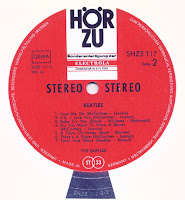 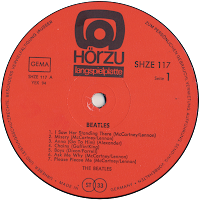 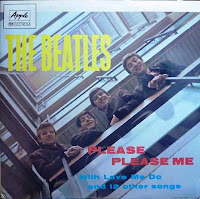 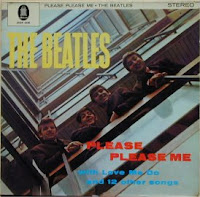 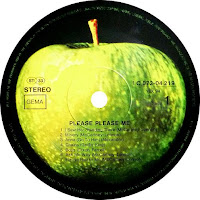 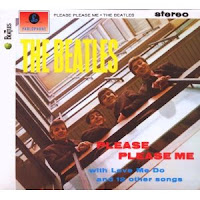 The remaster is a superior product, with excellent clarity and definition, and gobs of low and top end. In comparison to other sources, the remaster wins many times.

Reported that the UK, Germany, and/or Japan release may be mastered with more clarity and/or warmth than the US or Canada issue.

The best Please Please Me analog-to-digital rips emanate from Dr. Ebbetts and pbthal ("Tube-Cut"). These audiophiles used superb equipment, passion, and a good ear, so it might be worth your time to seek them out, especially since it can be a chore to find a good-quality vinyl pressing at a decent price.