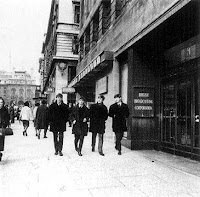 Brian Epstein had done a terrific job of securing The Beatles timely appearances, and this was no exception. The day after signing a deal with Vee-Jay Records, giving them access to America (Capitol Records had at this time politely declined), The Beatles were back on the radio for their first appearance on BBC Light’s Saturday Club, a rock and pop venue with tart host Brian Matthew and an audience of millions. The combination of their several TV and radio spots this January would push “Please Please Me” to #1, and Matthew was not without some foresight, his introduction of the band saying as much. The Beatles performed on January 22, between 4-5pm, at the Playhouse Theatre, London, and played five songs. The show was aired on January 26 from 10am-noon.

On the same day, the lads moved over to London's BBC Paris Studio where, from 7-8pm, they performed three songs for The Talent Spot. This show was broadcast on January 29, from 5-5:29pm ("Please Please Me" and "Some Other Guy" are unavailable).

“LOVE ME DO” (Saturday Club)

“KEEP YOUR HANDS OFF MY BABY” (Goffin-King) (Saturday Club)

AUDIO SOURCE: Purple Chick's The Complete BBC Sessions - Upgraded for 2004, Disc 1 provides the cleanest, most complete, and speed-checked experience. You can also hear the tracks: here.

Apple’s release of “Keep Your Hands Off My Baby” (Live at the BBC) includes a manufactured instrumental intro where none existed (fake).

A comprehensive history of The Beatles at the Beeb bootleg releases is: here.

ACETATE: A look at a possible acetate from this date is: here.

TOURISM: The BBC Paris Studio, where many famous BBC radio shows were recorded, was in Waterloo Place at the bottom of Lower Regent Street. It closed in 1995.

Email ThisBlogThis!Share to TwitterShare to FacebookShare to Pinterest
Labels: 1963, ask me why, bbc, love me do, please please me, some other gu