After the Decca rejection (1962, January 1), Brian Epstein was somewhat upset but far from despondent. His spirits were actually buoyed beyond natural response by the slim attention given him by George Martin, which carried Brian to not only cut ties with Dick Rowe but also with Bert Kaempfert of Polydor. Kaempfert’s March 3, 1962 reply to Brian’s letter of February 20 read that he was willing to release The Beatles from their contract, but greatly desired to have them record for him while they were in Hamburg that spring. Brian agreed in a letter dated March 27, but also gave formal notice to Kaempfert that June 30 would be The Beatles' final day in the Polydor stable. This was made to good accord on April 9, 1962, when Brian finally met Kaempfert on a visit to Hamburg in preparation for The Beatles' arrival a few days later1, 2. The break with Polydor became formal when Kaempfert put it in writing on May 253, the day after The Beatles recorded this last Tony Sheridan session.

The Beatles’ transition from Polydor to Parlophone artist can be observed in their concert advertising. For the March 31, 1962 show at Subscription Rooms, Stroud, the band billed as "stars of Polydor Records"4; for the April 6 show at the Tower Ballroom, there is no mention of their affiliation5; and, for the June 21 show at the Tower Ballroom, The Beatles are "Parlophone Recording Artistes"6.

At this May 24, 1962 session (Lewisohn had previously guessed incorrectly at April 1962), recorded in Studio Rahlstedt (finally correct), The Beatles and pianist Roy Young laid down the backing tracks for "Sweet Georgia Brown" and "Swanee River." Tony Sheridan was not in attendance, but would come to the studio on June 7 to add his vocals, by which time The Beatles were back in England and recording for George Martin. It should be noted that this recording of "Swanee River" never saw release, and is not available by any means; heard up to the present day is a December 21, 1961 version of that song by Sheridan without The Beatles7. On January 3, 1964, Sheridan re-entered the studio to re-record the vocals for "Sweet Georgia Brown” with new lyrics, by Liverpudlian Paul Murphy (Sheridan's engineer)7 (50), that took on then-fab superstars, The Beatles.

3 Miles and Badman, The Beatles Diary: The Beatle Years, p.63

“SKINNY MINNIE” (no evidence that this exists)

General Information. The Beatles possibly heard a Stereo playback of their backing tracks on May 24, 1962. Tony Sheridan's June 7 vocals for "Sweet Georgia Brown" were not known to the lads until the Polydor release, possibly played to them at some time during their stays in Hamburg, in November or December 1962. It is probable that no one outside Tony Sheridan and those in the Kaempfert engineering loop heard the original Stereo mix of "Sweet Georgia Brown" until it was unearthed by Gottfridsson in the 1990's, and included on an EP that accompanied his 1997 book, From Cavern to Star Club.

Note that all Stereo Variations become Mock-Stereo for the “vamp” at the end of the song.

For the sake of order, I will designate the first Stereo mix as 1.0 and the first Mono mix as 2.0, believing that Stereo mixes were made first and instantaneously (of course, the original two-track Stereo tapes should truly be considered 1.0, but, since they are lost or destroyed, we shall never hear them for any reason, let alone comparison).

Unreleased in its time, the original “Sweet Georgia Brown” (1.0) finds Tony Sheridan mysteriously yelling out "Tell it to 'em, Paul!" during the piano solo. "Sweet Georgia Brown" 1.0 is found on the aforementioned EP, and on source (4).

In April 1964, "Sweet Georgia Brown” (revised lyrics)(1.1) was first released on the album The Beatles' First (Polydor 237 632). In this Variation, Tony pokes fun at "Beatles' hair." Gottfridsson incorrectly stated that this Variation first appeared in February 1964, on the French 10" LP Les Beatles (Polydor 45 900), but this album has been proven to be Mono only (as Brennan first noted). Brennan was correct when he made The Beatles' First the original source, but was slightly off by guessing its release date as June 1964. Castleman/Podrazik placed the date of release for The Beatles' First as June 19, 1964, but nevertheless gave the UK catalog number (Polydor 236 201), which itself seems to have been from July 1967. "Sweet Georgia Brown" 1.1 is found on sources (1) through (6). 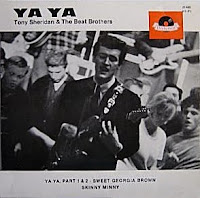 In April 1964 (possibly April 8), "Sweet Georgia Brown" (revised lyrics)(2.1) was first issued on the album The Beatles' First (Polydor 46 432), with a simultaneous (or almost so) release on a single (Polydor 52 324), the B-side to Tony Sheridan’s non-Beatles version of “Skinny Minnie." Castleman/Podrazik reported incorrectly that this Variation first appeared on a different single (Polydor 52 906), this error due to a given release date of January 31, 1964, which should be amended to June 1964 at the least, and perhaps as late as January 1965. Gottfridsson incorrectly stated that this Variation first appeared in February 1964, on the French EP Ain't She Sweet + 3 (Polydor 21 965), but I have been informed quite clearly that the red label used for this EP was not manufactured until about June 1964. Brennan made the same (or similar) error for this EP, and furthermore placed Les Beatles (Polydor 45 900) ahead of The Beatles' First, not realizing that the French LP was released about a month after the German album. "Sweet Georgia Brown" 2.1 is found on source (1). 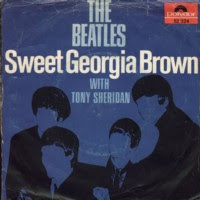 "Sweet Georgia Brown" Based on Variation 2.1, this overdubbed version is necessarily a new Mono mix by virtue of its obvious extra guitar and drums. It was released on June 1, 1964 (ATCO 45-6302), but did not chart. "Sweet Georgia Brown" (2.2) is found on Beatles Bop – Hamburg Days. 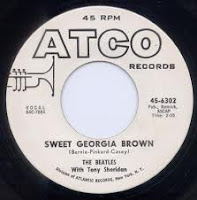 The designation (derived from Mono) is “Sweet Georgia Brown” (2.2.1). Further information is identical to 1961, June 24 (disputed), under the same heading.

Available on the bootleg collection Every Little Thing, Volume 4, Disc 2.

Some enterprising persons have applied the OOPS (out-of-phase) method to "Sweet Georgia Brown" in order to accentuate The Beatles' contribution, the backing. The most complete removal of Tony Sheridan's vocal is on the Purple Chick bootleg, I Hope We Passed the Audition. It's very digital-sounding to these ears.

Another OOPSED version, with less of Tony scrubbed, but also more natural-sounding, is: here.

Neither of these receive a Variation designation since they are fan-created.

TOURISM: As near as I can tell, Studio Rahlstedt (a.k.a. “Studio Wandsbek” and “Studio Hamburg”) no longer exists.

RELATIVES: Everything you ever wanted to know about Bert Kaempfert: here.

RELATIVES: I'll bet you didn't know that Brian Epstein asked Roy Young to join The Beatles. See the claim: here. Or, that in 1961 Young, Tony Sheridan, and Ringo were in a band known as The Beat Brothers. See the photos: here. Read a fascinating interview with Young: here.

RELATIVES: Paul Murphy purchased the Star Club tapes from Allan Williams, and produced them for distribution in 1977. See that story: here.