The Beatles with Tony Sheridan continued recording for Bert Kaempfert. It has for some time been an object of argument when and where the recording for the three songs assigned here took place. Lewisohn indicated that he believed the Sheridan sessions to be a one-day affair, and was incredulous that they should have lasted even two days, never mind a third (June 24, 1961) for the recording of "Take Out Some Insurance on Me, Baby" (apparently the extent of the dispute to this point, that is, 1992), which he called “unlikely”1. Lewisohn was in large part correct.

The problem derives mainly from a page of Polydor paperwork, a “protocol,” which states clearly that “Take Out Some Insurance on Me, Baby” was recorded on June 24, 1961, at Studio Rahlstedt2. Beatles historian Eric Krasker has kindly contacted me by e-mail (through this website) to relate that this protocol is not only incorrect, but a fake, “typed three years after the recordings!” Gottfridsson, for his From Cavern to Star Club, researched this protocol (among many others), but failed to report (though he knew) that two Polydor archive directors and several sound engineers had been warning for some time that the protocols for “Ain’t She Sweet” and “Take Out Some Insurance on Me, Baby” were both faked and incorrect3. In 2001, Gottfridsson rewrote his own history for the booklet that accompanied the CD-set Beatles Bop - Hamburg Days, and therein (correctly) put the recording date for all songs at either June 22 or June 23, 1961, and the place as Friedrich Ebert-Halle rather than Studio Rahlstedt, which was not fully functional until February 1962 (pp.19,57).

Winn made the date June 24, relying on Gottfridsson's error rather than on the redaction. This has caused much imitation, especially on the Internet, and in compilations that take his word. Eric Krasker has been very helpful to me in understanding the exact circumstances that led to June 24 being published in Way Beyond Compare3.

Richard Moore, commenting to Gottfridsson (also in the Beatles Bop booklet, p.21), discerned a different sound between the June 22 and June 23 sessions, and placed these three songs on the latter date. Many other experts have also noted that the sound quality of these three recordings is different (better in many ways) than the sound quality of the previous four songs (1961, June 22-23), but in no event did the location change, only perhaps the arrangement of the “furniture” in Friedrich Ebert-Halle. According to Eric Krasker, a forthcoming set of facts will explain this change in ambience3.

According to Gottfriddson, the lads provided the following vocals and instrumentation:

Paul: electric bass on all three;

Pete Best: drums on all.

The band had performed "Ain't She Sweet" onstage as early as 1957, probably drawn to it by Gene Vincent's 1956 version on his Bluejean Bop! LP. John commented: “Gene Vincent's recording of ‘Ain't She Sweet’ is very mellow and high-pitched and I used to do it like that, but the Germans said, ‘Harder, harder.’ They all wanted it a bit more like a march, so we ended up doing a harder version”4. Paul added: “Songs like ‘Till There Was You’ and ‘Ain't She Sweet’ would be the late-night cabaret material. They showed that we weren't just another rock 'n' roll group”5.

In 1957, Cynthia Powell gained a place at Liverpool College of Art. While there, she took a class in lettering. During the first lesson, a “teddy boy” came in late and sat down behind her. He tapped Cynthia on the back and said, “Hi, I'm John.” John never brought any supplies with him, so he constantly borrowed pens and pencils from Cynthia. She also found out that he was only in the lettering class because other teachers refused to have him. John sometimes brought a guitar with him into class. One day, he sang “Ain't She Sweet” directly to Cynthia: “Halfway through the term I realized I was falling for him and scolded myself. I was being ridiculous: he wasn't at all the type of boy I'd imagined myself with and, in any case, I couldn't see him being interested in me. But that changed one day when everyone else had left the class and I was packing up my things. John was sitting a few feet away with his guitar. He began to play ‘Ain't She Sweet,’ a song that was popular at the time and which the Beatles were later to record. I blushed scarlet, made an excuse, and fled before the end of the song. But I'd seen the look in his eyes, which he'd kept fixed on me as he sang – could it be that John fancied me, too?”6.

In a 2005 interview, Chris Hunt asked Cynthia, "What is your favourite memory of John?" She answered, "There are quite a few but probably when we were at college and he sang 'Ain’t She Sweet' to me. Did my heart melt? Yes, and I walked out in embarrassment. It was so beautifully done. That always sticks with me”7.

General Information. The Beatles would have heard Stereo playbacks on this day (Mono mixes being made later for release).

For the sake of order, I will designate the first Stereo mix as 1.0 and the first Mono mix as 2.0, believing that Stereo mixes were made first and instantaneously (of course, the original two-track Stereo tapes should truly be considered 1.0, but, since they are lost or destroyed, we shall never hear them for any reason, let alone comparison).

In April 1964, "Nobody's Child" (1.0), "Ain't She Sweet" (1.0), and "Take Out Some Insurance on Me, Baby" (1.0) were released for the first time on the album The Beatles' First (Polydor 237 632). "Take Out Some Insurance on Me, Baby" 1.0 finds Tony Sheridan saying "goddam." Gottfridsson incorrectly stated that these Variations first appeared in February 1964, on the French 10" LP Les Beatles (Polydor 45 900), but this album has been proven to be Mono only (as Brennan first noted). Brennan was correct when he made The Beatles' First the original source, but was slightly off by guessing its release date as June 1964. Castleman/Podrazik placed the date of release for The Beatles' First as June 19, 1964, but nevertheless gave the UK catalog number (Polydor 236 201), which itself seems to have been from July 1967. All these Variations are available on sources (1) through (6), except "Ain't She Sweet" 1.0 is not on source (6).

In April 1964, "Nobody's Child" (2.0), "Ain't She Sweet" (2.0), and "Take Out Some Insurance on Me, Baby" (2.0) were released for the first time on the album The Beatles' First (Polydor 46 432). Gottfridsson stated that these Variations first appeared in February 1964, on the French EP Ain't She Sweet + 3 (Polydor 21 965), but I have been informed quite clearly that the red label used for this EP was not manufactured until about June 1964. Brennan made the same (or similar) error for this EP, and furthermore placed Les Beatles (Polydor 45 900) ahead of The Beatles' First, not realizing that the French LP was released about a month after the German album. Note that "Ain't She Sweet" 2.0 and "Take Out Some Insurance on Me, Baby" 2.0 were also issued in April 1964 (Brennan wrote April 8, per Moers), released together as a German single (Polydor 52 317), simultaneous (or almost so) with the German LP. This single was also released in the UK on May 29, 1964, under the same catalog number, and "Ain't She Sweet" reached #24 on the UK charts the same week. Note also that "Nobody's Child" on another single (Polydor 52 906) is a completely different recording, Tony Sheridan without The Beatles (no Variation), and was not released in January of 1964 (as reported in, for example, Castleman/Podrazik), but more likely after June, possibly even January 1965.

ATCO Mono
General Information. ATCO (The Atlantic Corporation) leased the rights from Polydor to market, in the US, four of the eight Tony Sheridan recordings (MGM received the rights to the other four). The story goes that, in January 1964, ATCO hired drummer Bernard Purdie and guitarist Cornell Dupree to overdub parts for the songs they acquired. While the overdubs are obvious, many dispute the names Purdie and Dupree. It should be noted that, although Bernard Purdie, an exceptional drummer, is not in his interviews a reliable source of information concerning his role in Beatles recordings (his claims are ridiculous), it is possible, even likely, that Purdie is the drummer that Atlantic/ATCO hired in 1964 to sweeten Pete Best's drums on this and perhaps other songs. See a terrific article: here.

Three songs derive from this date. The fourth ("Sweet Georgia Brown") was recorded in 1962.

"Ain't She Sweet" The overdubbed version can be best identified from the original by the drum triplets heard just before the guitar solo. There are also drum triplets (roll) before each verse, and extra hi-hat in the bridge, not heard on the original. As well, some echo (or compression) was added over the original recording. No guitar or piano was overdubbed (despite some references). This variation has to me some personality by its familiarity (that is, as the "US single"). It was first released on July 6, 1964 (ATCO 45-6308), and subsequently on several CD's, including The Early Tapes of the Beatles. It also happens to be on Anthology 1. The 45 reached #19 on the US charts, on August 22, 1964. "Ain't She Sweet" (2.1) is found on Beatles Bop - Hamburg Days.

"Nobody's Child" The B-side of "Ain't She Sweet" (45-6308) did not receive any overdubs, but was edited mercilessly, from 3:52 to 2:54. Most of the second verse and the guitar chords at the end were excised, although the final bass/guitar chord remains (one would hope!). "Nobody's Child" (2.1) is found on Beatles Bop - Hamburg Days.

ATCO received the rights to these three songs, but they did not get the Stereo tapes, so they apparently "created" their own Rechanneled (aka Mock-Stereo, Fake-Stereo, Duophonic, Stereo from Mono) versions. Their designations (derived from Mono) are "Ain't She Sweet" (2.1.1), "Nobody's Child" (2.1.1), and "Take Out Some Insurance on Me, Baby" (2.1.1). 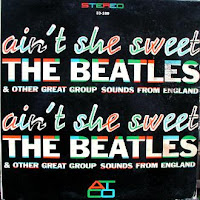 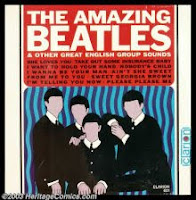 I need to make an update here to say that I discovered all three Mock-Stereo tracks available on the bootleg set Every Little Thing, Volume 4.

Some enterprising persons have applied the OOPS (out-of-phase) method in order to bring out the raw texture of the original tapes. I found these to be quite pleasant, even preferable. The OOPSED versions are here and here. They receive no Variation designation since they are fan-created.

ACETATE: A Mono "acetate" of "Ain't She Sweet" can be heard: here. It is actually the original Mono mix, before any overdubs. The website claims this is a 10" MGM/Verve acetate, but would it not be ATCO? No photo of the acetate is provided.