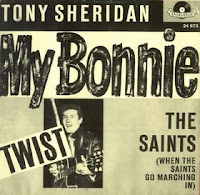 The five-man Beatles, now with Pete Best (hired August 12, 1960), came to Hamburg for the second time in late March of 1961, and there backed rocker Tony Sheridan at the Top Ten Club. German bandleader and record producer Bert Kaempfert, visiting the club, liked what he heard and signed Sheridan to a Polydor recording contract, with The Beatles as a backing band. Stu did not sign, and left the band for greener pastures, making Paul the bass player by default.

The recording sessions took place on the stage of a school auditorium (Friedrich Ebert-Halle), with engineer Karl Hinze manning the two-track recorder. According to Gottfriddson, the lads provided the following vocals and instrumentation:

Pete Best: drums on all.

It is believed that "My Bonnie" was recorded with the English slow introduction, and that the German slow intro (subtitled "Mein Herz ist Bei Dir Nur") was an edit piece recorded after. Certainly, elements of one (Tony's guitar; the final "doo-doo-doo" backing vocals) are different from the other, and the intros time out unevenly (35 seconds for the English, 36 seconds for the German); but, while this does prove that the different intros were separate takes, it doesn't necessarily follow that either was part of the original take. Another piece of evidence is a piece of Polydor paperwork (a protocol) stating that the "Englische Fassung" (English version) of "My Bonnie" is the "original long version" (this paperwork reproduced by Gottfridsson for the CD-set Beatles Bop - Hamburg Days booklet, p. 60, although he says quite inexplicably, on p.58, that the "introductions were recorded separately and were not edited into place on the master tapes until the 4th of October, 1961").

"CRY FOR A SHADOW" (Harrison/Lennon)

General Information. The Beatles would have heard Stereo playbacks on these days (Mono mixes being made later for release). 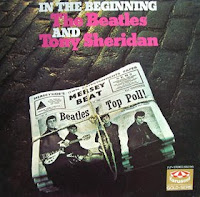 The CD re-release of the LP is not quite as good. 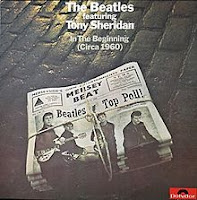 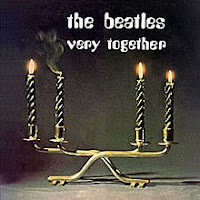 (4) The mixes presented on Beatles Bop- Hamburg Days CD set (Bear Family) appear to be original, the Stereo as wide as previous releases without tampering ("Cry For a Shadow" remains narrow Stereo). The CD set also claims to be "remastered." Stereo mixes are well-defined, with nice lows. Compared to vinyl sources, I think the lead vocal is louder on the CD, which is certainly the result of boosted gain, but probably some EQ tweaks (and/or limiting) as well. In sum, the CD set ought to be sufficient for those mixes it furnishes, although superior sources are available. 9/10 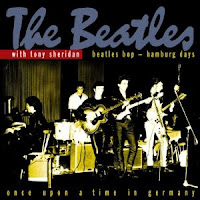 The 100-page "booklet" that comes with the Bear Family CD set is very informative, but Gottfridsson (the author) appears to have made a few questionable assumptions. Consult Krasker for superior research and unveiling.

(5) The Contour label re-issued source (2) as The Early Years Stereo LP (Contour 2870111). The sound is terrific, but appears to have a touch of compression, and is likely a tape generation further from source (2). Contour re-issued this LP as The Beatles Featuring Tony Sheridan (Contour CN 2007). Same sound, worse packaging. 9/10 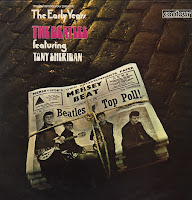 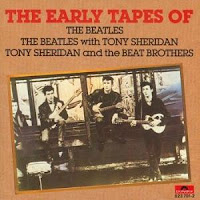 For the sake of order, I will designate the first Stereo mix as 1.0 and the first Mono mix as 2.0, believing that Stereo mixes were made first and instantaneously (of course, the original two-track Stereo tapes should truly be considered 1.0, but, since they are lost or destroyed, we shall never hear them for any reason, let alone comparison). "My Bonnie" will be assumed (though not proven) to have first included an English intro. 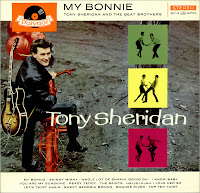 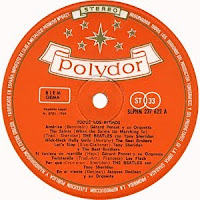 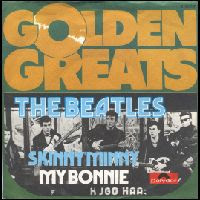 Mono Mixes. It has been proposed that the Mono mixes may be "collapsed" (that is, Mono-from-Stereo) rather than true Mono. The Beatles Bop - Hamburg Days booklet mentions that the original two-track recordings are forever gone, and that the Mono tracks on the CD set are transfers from mixdowns already made. This doesn't answer the question, but at least lets us think that the tracks on the CD set are the same as those on the vinyl releases. Therefore, whether we have the CD or the vinyl, we ought to have the same thing, either True Mono or collapsed Mono. Having compared the (purported) Mono mixes on the CD set (and on vinyl) to actual collapsed Mono (which I created with both CD and vinyl sources), I sense some slight difference, and therefore the CD set (in my opinion) has delivered True Mono mixes. As a further bit of evidence, many pages of Polydor paperwork (protocols) reprinted in the Beatles Bop - Hamburg Days booklet are often stamped "Stereo Kompatibel" (Stereo compatible), indicating that the mixdowns listed on such paperwork may be true Mono mixes.

Brennan disagrees, citing Karl Hinze's recollection that all mixes were straight to Stereo, and making the inference therefore that all Mono mixes must be collapsed Mono. However, this inference is not necessarily true since three months passed between the recording and the release of the first vinyl from these sessions, ample time to prepare true Mono mixes. Brennan furthermore supports his theory by stating that no Variations have been found between Mono and Stereo mixes, but the true comparison (which I have conducted) is between that which is called true Mono and collapsed Mono. However, my particular sonic experience is not the last word. 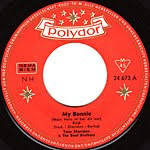 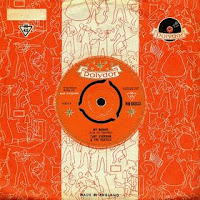 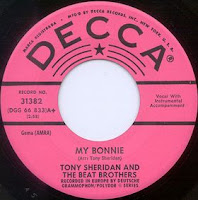 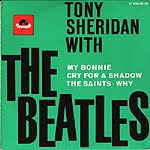 "My Bonnie" (no intro)(2.2) was also issued in Mono. It was actually quite the historic occasion when, on January 27, 1964, just before The Beatles entered America, MGM released a single (K13213) to capitalize on the coming Beatlemania. On March 14, 1964, this single reached #26 on the US chart. This Variation is found on source (1). 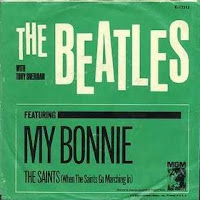 MGM received the rights to these four songs, but they did not get the Stereo tapes, so they apparently "created" their own Rechanneled (aka Mock-Stereo, Fake-Stereo, Duophonic, Stereo from Mono) versions. Their designations (derived from Mono) are "My Bonnie" (no intro)(2.2.1), "The Saints" (2.1), "Why" (2.1), and "Cry For a Shadow" (2.1).

These "mixes" (really, manipulations) were released February 3, 1964 on the LP The Beatles with Tony Sheridan and Guests (MGM SE 4215), which was reissued on August 15, 1966 as This is Where It Started (Metro MS563). Both of these albums are pretty rare, and there have been no bootleg releases of the four Rechanneled tracks (as far as I know). See how rare: here or here. More information on Tony Sheridan releases, including Rechanneled Stereo: here. 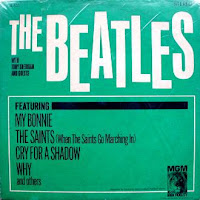 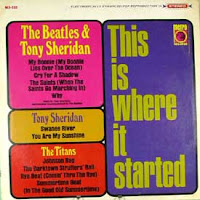 Stereo "medley" versions of "My Bonnie" (English intro), "The Saints" and "Cry For a Shadow" were created, beginning in 1968. These were clipped cuts segued to connecting cuts, which produced a desired dance effect, much like today's "mix tapes." Their designations (derived from Stereo) are "My Bonnie" (English intro)(1.0.1), "The Saints" (1.0.1), "Cry For a Shadow" #1 (1.0.1), and "Cry For a Shadow" #2 (1.0.2). Note that the use of the English intro on "My Bonnie" here lends more credence to the idea that it was on the original recording and/or mix. Beatles Bop - Hamburg Days contains all of these Stereo medley versions, as well as Mono variations, which are likely only collapsed Mono-from-Stereo (and thus no designations), as I can find no evidence that any of the medleys were ever released in true Mono. 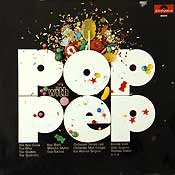 "My Bonnie" (English intro) is found on this EMI set, in Stereo. The first line of the vocal intro is obscured by a cross-fade with the previous spoken track. After the intro, the body of the song has the Stereo image reversed (Reverse Channels). According to Brennan, the image reversal perhaps adds weight to the idea the English intro is a separate edit piece, although he concedes that EMI may have separated the intro from the body while working on the aforementioned cross-fade. All of this constitutes a new Variation (1.0.2). It's also mastered differently than previous releases, with a fuller sound.

"Cry For a Shadow" on Anthology also has Reverse Channels (1.0.3). The mastering is fuller here as well, but I think there's also some noise reduction.

Some enterprising persons have applied the OOPS (out-of-phase) method in order to bring out the raw texture of the original tapes. I found these to be quite pleasant, even preferable. The OOPSED versions are here and here. They receive no Variation designation since they are fan-created.

VIDEO: Videos of Tony Sheridan discussing these recording sessions may be found in various locations, for example, on You Tube: here, here, and here. Especially notice one that addresses Paul's new burden on bass. Note that Sheridan's veracity and/or memory has been questioned.

DRAMATIZATION: A scene in the film Backbeat depicts the recording of "My Bonnie."

TOURISM: The Top Ten Club, now defunct (closed 1995), could be found at 136 Reeperbahn, St. Pauli, Hamburg. An excellent website, covering all the Hamburg clubs the Beatles played, is: here. Another cool page is: here.

Friedrich Ebert-Halle was originally a gymnasium in a children's school in the Harburg section of Hamburg. It no longer exists. The new facility on that spot is a world-famous concert hall that has hosted many acts, including rock legends The Who and Pink Floyd. See the hall, before and after: here.

READ: My forthcoming book (not yet titled) will deliver the truth concerning the title "Cry For a Shadow."