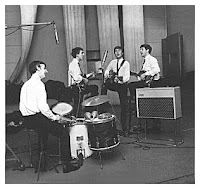 General Description. This is the “Ringo Version.” In relation to the “Andy White Version” (1962, September 11), this has no tambourine in the song, and instead there are hand-claps during the harmonica solo.

Variations. There is only one Variation (1.0), mastering issues notwithstanding.

Generations. (1) “Love Me Do” 1.0 was released in the UK, October 5, 1962, as the A-side of The Beatles’ premier single. EMI also sent metal masters from the lacquer to Sweden (and possibly Norway and Finland), for a March 1963 release. This was the first generation.

(2) All other countries received the UK 45, not tapes or metal parts, to dub for their own release. This was the second generation.

(3) Not long after, the original twin-track master tape for “Love Me Do” 1.0 was trashed (per EMI protocol, we are told), and the Mono mix tape was lost shortly thereafter. According to EMI’s Mike Heatley,

“I'll tell you the story. We did not have the original tape of ‘Love Me Do.’ It was removed at the time the Beatles' Hits EP came out (September 1963). The company were instructed at that time not to use the original single version for the EP, but to substitute the album take instead” (interview, Record Collector magazine #50, October 1983).

UPDATE January 30, 2011. After looking more closely into John Barrett's notes (here) and Mike Heatley's comments, I now believe that "Love Me Do" 1.0 was recorded in Mono, not twin-track Stereo, onto EMI Reel E47730. Therefore, no twin-tracks existed to destroy, nor was any Stereo mixing ever possible. EMI Reel E47776 likely represented an edit reel for "Love Me Do" 1.0, and (if there were no edits) a safety copy for "How Do You Do It." Both Mono reels are now missing or destroyed. "How Do You Do It" remained viable for the planned Sessions album by its inclusion on the single master EMI Reel TL14063 (and a later-discovered 7" acetate), but "Love Me Do" 1.0 was cut from TL14063 in favor of "Love Me Do" 2.0. In 1967, when "Love Me Do" 1.0 was discontinued from the EMI catalog, the lacquer, mother, and all stampers for the UK 45 were destroyed, thus making it impossible to press any further first-generation releases.

(4) When in 1980 it was decided to include "Love Me Do" 1.0 on the US LP Rarities, it was necessary to make a needle-drop copy (a dub) from circulating vinyl, in this case coming from a collector’s 1963 Canadian 45. At least this is the official story. The collector, Ron Furmanek, publicly attested many years later,

“I had 2 mint Canadian ‘Love Me Do’ 45's with me at the session, along with a near mint UK pressing & (I believe) a German Odeon EP, to pick & choose for what we did with ‘Love Me Do.’ It was an edit from several sources. So, what is always repeated in books & online is incorrect.”

(5) There was a return to the second generation in 1982, when a UK 45 was made available to EMI by a British collector (not Mark Lewisohn) for use in producing the twentieth-anniversary 12-inch single. According to Mike Heatley,

“In the run-up to the twentieth-anniversary last October we were searching high and low, not only here but also in Canada, where the single also came out. We even found a friend of mine in Sweden, a collector called Steffan Olander, who got EMI in Sweden to issue the original ‘Love Me Do’ a couple of years ago. He'd given me a copy of this single which was fine, except that about two-thirds of the way through the song became distorted. So there was no way we could use that version; and reluctantly we decided to use the album version for the reissue. Now, just as the single and picture discs were being pressed up, I had a call from another collector and I told him the story. He said he had a friend who had a nearly Mint copy of the original single. You have to appreciate at this stage, it was three days before the single was coming out, the picture discs were all ready to roll, the announcement had already been made to the trade - what could we do? In the end, I arranged for a messenger to go to this person's house, pick up the record, and deliver it to me here at EMI. I think in the end they said they were going to send a motorbike, and I said no, there's no way you're going to send a bike - what happens if he falls off?! So in the end we sent a car to pick this record up and deliver it to me here on the Saturday. It was then stored in a safe over the weekend; I came in on the Monday morning, took the record straight up to Abbey Road, we played it, and it was clean as a whistle; and that's the version we used for the twelve-inch.”

(6) The master for the 12-inch single was used for all releases thereafter, including 1988’s Past Masters 1, as well as 2009’s remaster of that CD (albeit with less processing, and speed-corrected) and 2009's Mono Masters.

End of Song. The last sounds in the fadeout of “Love Me Do” 1.0 are four notes of a rising harmonica riff. The 2009 Remaster fades two notes early. 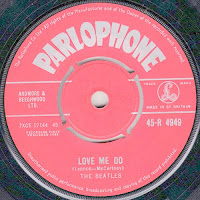 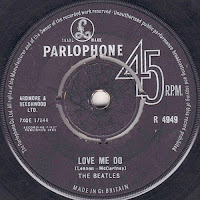 General. There were apparently four pressings of this single (Parlophone R-4949), first on a red label and subsequently on a black label, manufactured until 1967. The reissue singles pressed beginning in 1976 used the “Andy White Version." Photos and information: here and here. In order to identify "Love Me Do" 1.0 on these singles, one has only to look for a matrix number (in the dead wax) which ends in "-1N." Specific pressings (first press, etc) can be identified by a "tax code" (also in the dead wax). Photos and information: here and here. 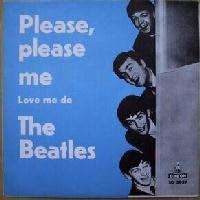 The picture sleeve for this Swedish 45 apparently comes in several colors.

General. This single (“Please Please Me”/ “Love Me Do”), issued March 5, 1963 (Odeon SD 5937), definitely used Variation 1.0, and is said to have been pressed from the UK stamper, which makes it first-generation. This information is based on the Mike Heatley interview above, and its mention in the McCoy & McGeary book, Every Little Thing. Also, see: here. 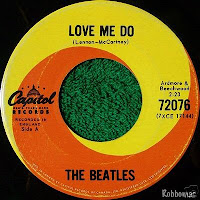 General. According to Graham Newton, who did the Canadian mastering, this single (Capitol of Canada 72076), released February 18, 1963, is a dub of an original UK 7-inch 45, pressing unknown (ref: here). Basically, if you’ve heard this, you’ve heard the UK 7-inch 45 (with perhaps some loss of clarity).

Sonic Rating. GOOD. Good: Vocal has no distortion and remains out-front. Bass has a nice plop to it. Original intent. Bad: Full of low frequencies. Guitar is lost. Claps are murky. Drums not crisp. Harmonica distant. 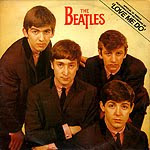 General. Basically, if you’ve heard this, you’ve heard UK 7-inch 45 (with perhaps some loss of clarity). Mike Heatley (same interview above) verified this when he stated that even the distorted harmonica heard on the 12-inch single is directly from the UK 7-inch 45. 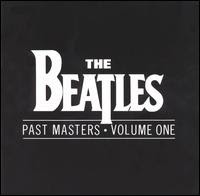 Imbalance. Full-spectrum Stereo artifacts to about 13.5 KHz, peak about -60 db. Not a big deal. Has been argued as the right candidate for Channel Duplication Solution.

Sonic Rating. GOOD. Good: Bass and drums are excellent. Guitar is quite audible. Claps passable. Bad: Terribly bright from huge mid-range, even though frequency analysis of the WAV file shows a sharp drop at about 12.5 KHz, from about -47 db to -67 db. Vocals and harmonica are harsh, even distorted at points. Analysis has shown that "Love Me Do" 1.0 also plays slightly fast on this CD (ref: here). 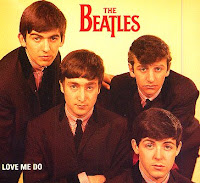 General. Re-released for the 30-year anniversary, "Love Me Do" 1.0 hit #52 on the UK chart that year. Be aware that some examples are known to have "CD rot." 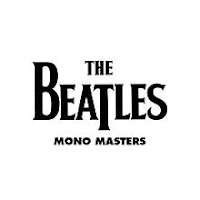 My source. FLAC. Note: This review is for "Love Me Do" 1.0 on Mono Masters, not on the Past Masters remaster. What's the difference? The latter is gained way too hot, and is distorted.

Sonic Rating. The mid-range has been pushed beyond its bounds, and the positive clarity Ebbetts sought is actually a buzzy, irritating mess. I also think it runs a little slow. 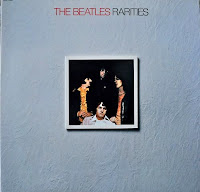 As detailed above, this was mastered mainly, if not wholly, from a copy of the Canadian 45.

Imbalance. Vinyl untested electronically, but summing to Mono produced some audible effects. Testing the Ebbetts track proved this theory correct, as much distorted full-spectrum Stereo artifacts were apparent to about 20.5 KHz, peak at about -29 db. Good candidate for Channel Duplication Solution.

Sonic Rating. Vinyl and Ebbetts (slightly less exciting), EXCELLENT. Good: Drums have snap. Harmonica is full, if a bit loud. Bass is rugged, if a bit rumbly. Vocals are, for the most part, evenly leveled. Crisp claps. Guitar has some visibility. Bad: Short one note at the end. A few pops from the vinyl. Not bad at all. Nevertheless, Mike Heatley said,

“When the people at Capitol Records were putting together the American issue of Rarities, they used a tape which was acquired from a dub; but, when the tape was being cleaned up, much of the quality of the recording was unfortunately lost.” 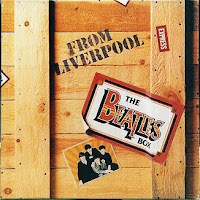 General. This is “The Crate” (its nickname), issued by World Records (SM 701/8), EMI’s mail order division.

Same Canadian 45 used here as for Rarities. The vinyl pop on the first note of the second harmonica riff (4 seconds in) is the giveaway, as is the missing final note.

Sonic Rating. The general feeling that this is an inferior pressing to Rarities seems to be correct. The vocals warble a bit, and there seems to be less dynamism. 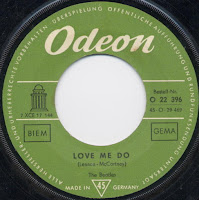 An "outfake" is a fan-created mix or recording.

Although "Love Me Do" 1.0 was never mixed into an authorized Stereo mix, the gray-area collection Casualties (detailed information: here) purports to carry one. This was retained on the Dr. Ebbetts remaster of Casualties.

It's fun to hear, but it's not a true Variation.

In October, 1982, EMI produced two varieties of a promo film for "Love Me Do" to coincide with the 20th-anniversary single, both using “Love Me Do” 1.0 for audio.

(1) The first variety features miming footage from The Mersey Sound documentary from 1963, and photographs from the September 4, 1962 rehearsal/recording session. This can be found on the bootleg DVD Chronology 1962-1970, Volume 1 in very good transfer, where the music ends a bit soon in the fade (nothing drastic). The same video is included in the Anthology DVD where, at the end, the elder Ringo is shown tapping away with the music.

(2) The second variety is more interesting (to me), showing vintage film of the boys in the midst of Beatlemania, interspersed with footage from The Mersey Sound. This can be found on the boot DVD Chronology 1962-1970, Volume 2 in very good transfer, rolling out to the end of the song. A treat.

The sound quality on both varieties is good, but will not satisfy for the sake of your audio collection.

PHOTOS & INFORMATION: A photo gallery from the rehearsals can be viewed: here. Note George’s black eye.

Although I use quotes from sources, or cited fact, much of the material on this and other pages of my blog is original, from my own pen. This is not cut-and-paste, it is a work of art. Copyright © 2010 Tom Wise