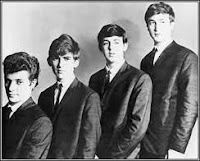 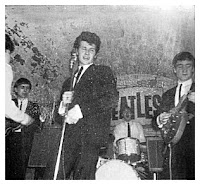 The June 6 recording session had been promising, but George Martin was single-minded to replace Pete Best at drums whenever The Beatles were to record; on the road would be the business of the band. We don’t know the exact day that Martin transmitted this message to Brian Epstein, nor do we know exactly when John, Paul, and George made up their mind to officially sack Pete and/or replace him with Ringo Starr, but there seems to have been a juncture of purpose which left the lads with only one destiny, in much the same manner that John decided to partner with Paul rather than to exclude him for his competing leadership and talent. Thus, on August 15, 1962, Brian was given the unenviable job of dismissing Pete, which he did on August 16 (also at that time offering the stunned drummer an opportunity to form a Beatles spin-off, The Merseybeats). John later told Hunter Davies, "We were cowards when we sacked him. We made Brian do it," but "It would probably have ended in a fight if we'd told him”1. Although fired (and in shock), Pete agreed to stay on a few days until Ringo could join, but changed his mind so quickly that Johnny Hutchinson (of The Big Three) was necessary to fill in for a show the same day. This temporary condition only lasted two days, for on August 18, 1962 Ringo joined The Beatles for their Hulme Hall, Birkinhead gig.

It’s not as if Ringo was a stranger to The Beatles, for he had been as much a Liverpool and Hamburg fixture as any of them (playing most famously for Rory Storm and the Hurricanes, but also in Germany for Tony Sheridan), and was quite admired. In October 1960, Ringo (not Pete Best) played drums for Lu Walters on “Summertime” as John, Paul, and George added further instrumentation2 (Lost or Missing Tapes, 1957-1962). In fact, “Ringo had been keen to join them for some time – he had even sat in with them on two occasions when Pete Best was ill (both were Cavern Club lunchtime sessions, the dates untraceable by the author)”3.

In what may be the most sordid episode in The Beatles’ career, the details remain murky. According to Pete, the real reason for his dismissal was never made clear to him. In a 1999 appearance, the following exchange took place during a question-and-answer period:

Q. Were you ever told the reasons for your sacking?

A. No, but let's look at the theories. I can’t accept the drumming theory, as when we came back from Germany other groups copied my style using the loud bass drum. Also, Bert Kaempfert was quite happy with my drumming when we recorded in Germany. As for Ringo being a better drummer, well, he was replaced on "Love Me Do" as well, wasn’t he? The hairstyle? That’s all rubbish, it was never even discussed. Jealousy? I was aware of the Pete Best fans, but there were plenty of Paul fans too. As long as the group got the attention, I was happy. Personality? I took part in all the crazy stunts and drinking. I was a Beatle. A rumour around the Cavern was that it was because I turned down Brian Epstein’s advances, but I don’t believe that. Unreliable? I missed four shows in over two years, so if that makes me unreliable... At the end of the day, two people still alive know the reason. We may all read about it in the newspapers next year, or we may never know4.

Nevertheless, there are several strong arguments against Pete’s confusion.

First, concerning the drumming itself, we know absolutely that George Martin was displeased with it, else there would have been no reason for him to make any suggestion of replacing Pete in the studio. John, Paul, and George have all connected the main part of Pete’s dismissal to that which was purely professional, the drumming. In 1974, John unceremoniously remarked, “By then, we were pretty sick of Pete Best too, because he was a lousy drummer, you know? He never improved, and there was always this myth being built up over the years that he was great... We were always going to dump him when we could find a decent drummer”5. Paul’s 2001 comment (on the Wingspan documentary DVD) that Pete was “a really good drummer” does not alter the truth, any more than it changes history. Further, Eric Krasker ascertained, despite Pete’s assertion to the contrary, that, during the Tony Sheridan sessions, Bert Kaempfert expressed reservations concerning (at least) Pete’s bass drum; and that Tony Sheridan, Karl Hinze, and Roy Young have all in some manner or another mentioned Pete’s shortcomings of talent6. But even if it’s absolutely true that Pete was “the No. 1 drummer in Liverpool... constantly talked about everywhere” and “the other drummers all tried to copy”7 his style, the fact is that The Beatles and George Martin were not impressed. As Krasker noted, “Obviously, if Pete had given a fine performance on 6 June 1962, George Martin would have made no negative comment about his drumming, and then it would have been much more difficult for the Beatles to find an objective reason get rid of a skilled drummer. After all, who would have taken the risk of changing a winning team?”6.

Second, although the jealousy towards Pete has probably been overblown, it seems to have contributed to his end. Several anecdotes float that, in the eyes of the other Beatles, Pete received too much female attention, or too high an accolade from a reporter, publicist or fan. But even if there was no jealousy at all, Pete’s popularity might have been an impediment to the ways of John and Paul, whose double-sided leadership could never have been completely turned over to the whim of the public.

Third, personality almost certainly had something to do with it, but probably not with the weight some ascribe. If John was in fact the most acerbic to Pete in years following, it’s interesting that Pete recently said, “John was a dear friend”7. Unless we are entirely cynical, we should probably grant this friendship. Paul was more direct, saying in 2001 (on the Wingspan documentary DVD) that “He wasn't quite like the rest of us. We had kind of a sense of humor in common and he was nearly in with it all. But it's a fine line, you know, as to what is exactly in and what is nearly in.” Ringo, they felt, had a humor and wit that fit them, a rougher image (which they liked), and much more talent as a drummer.

Although one might believe from all the information available that John and Paul were the conspirators against Pete, to hear George Harrison tell it, "I was quite responsible for stirring things up. I conspired to get Ringo in for good; I talked to Paul and John until they came round to the idea." Ringo confirmed that George was “hustling” for him8.

Pete became quite depressed by the news, and many of the female fans took to sleeping outside his window in a vigil for this reason, and to protest the decision. Discord began to shake through audiences wherever The Beatles played without Pete, and some of their fans turned on them in rebellion. At the August 22, 1962 Cavern Club performance, fans brought signs which read “Ringo Never, Pete Best Forever.”

RELATIVES: Keep up with Pete Best at the official website: here.