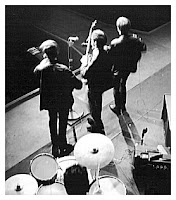 (above) onstage at the Playhouse Theatre this night

Flush with a Parlophone record contract, and having wowed ‘em once before (1962, March 7), The Beatles had no trouble in securing this second appearance on Teenager's Turn - Here We Go (again at the Playhouse Theatre in Manchester, and again with Ray Peters hosting), nor with getting enthusiastic fans to fill the audience, as the faithful lined up to order tickets through the Beatles Fan Club.

According to Lewisohn, the lads didn’t play “Love Me Do” or “P.S. I Love You” this night because they expected these two songs to be released as a debut single in July 1962. This may be, but certainly their hopes were dashed by their August 3 show in Grafton, for which a set-list, in Paul’s handwriting, included both songs1. The question is, once The Beatles knew that no single was forthcoming, did they reinstate the two songs to their set-list as a way to improve them for their next scheduled (September 4) recording session? It would seem likely, since on June 6 the arrangement for “Love Me Do” (at least) had been changed by George Martin (the suggestion being made that Paul move to the vocal for the “love me do-oo” hook while John concentrated on harmonica), and perhaps John or Paul felt a bit bashful about “practicing” on national television. “P.S. I Love You” may have been raw as well, but at least “Ask Me Why” was polished, since it was written in 1960 or before (1960, April circa).

This show aired June 15, at 5pm. It is the last known recording of Pete Best with The Beatles. In fact, after the show, the ensuing excitement in the streets of Manchester found Pete accidentally left behind, a grim omen.

The fact that “Love Me Do” and “P.S. I Love You” were played at Grafton on August 3 also negates any idea that The Beatles were waiting to spotlight these songs without Pete Best, since Pete did not get the boot until August 15. Yes, the others had been contemplating Pete’s removal for some time, but on June 11 they were not much further advanced in this idea, George Martin’s declaration in this direction not yet communicated.

AUDIO: Purple Chick's The Complete BBC Sessions - Upgraded for 2004, Disc 1 provides the cleanest, most complete, and speed-checked tracks. The bases for these tracks were "unbooted upgrades." Note that the FLAC version of the disc makes each intro to each song a separate track (6 tracks for 3 songs), while the mp3 version attaches each intro to its corresponding song (3 tracks for 3 songs).

Most of Great Dane's release runs too slow. You can find a comprehensive history of The Beatles' BBC bootleg releases: here.