General. Both songs were recorded twin-track-style, since at this time a two-track machine was the only option at Abbey Road. Onto EMI reel E48382, the instruments were recorded to one of the two available tracks, and the vocals were sent to the other (perhaps better stated that two Mono feeds were recorded).

No outtakes for "Please Please Me" are available, but at least one resource (beatlesong.info) incorrectly states that Take 5 (false start) resides on the bootleg 9-LP set Sgt.Pepper: History of the Beatle Years 1962-1970.

"Ask Me Why" took 6 takes, no overdubs, no edits. No outtakes are available.

Please Please Me. Lewisohn reported that the Mono mix for "Please Please Me" is from an "unknown take number" (singular), but Winn wrote that for the Mono mix "a twin-track master was edited together from at least two takes." Barrett's notes (here) do not recognize an edit coming in November, but lists one for February 25, 1963 (EMI reel E48979). Returning to Lewisohn, that February 25 edit only applies to a Stereo mix, no Mono mix listed for that date in Recording Sessions. Barrett's notes, however, would seem to indicate that both a Mono and Stereo mix were accomplished on February 25. On this, Winn is split, his comments on Barrett's notes asserting that February 25 constitute not only a Stereo, but also a different Mono mix (from edits), but Way Beyond Compare says no such thing, noting only a November 30 Mono mix (also from edits, as previously mentioned). Barrett, for his part, calls November 30 only a "remix from 2T" (twin-track). From these bits of information alone, I would judge that there is only one Mono mix for "Please Please Me" and that it is unedited.

Now, in Way Beyond Compare, Winn wrote that one can hear an "obvious" edit at 1:45 into the "Please Please Me" Mono mix, ostensibly with greater clarity on the CD 45 than on other releases. First, after close examination using Audacity, I do hear something at 1:45, but I would describe it as harshness, not an edit. This harshness may be found at other junctures as well. I also hear a clicking sound, but this is throughout the song, probably a guitar pick (also sounds like maracas). Second, none of these sounds differ markedly between the CD 45, the 2010 edition CD of The Beatles 1962-1966, the original Mono Please Please Me LP (Ebbetts needle-drop), the original UK 45 (Ebbetts needle-drop), or any other release I tested. Consequently, I remain convinced that there is a sole, unedited "Please Please Me" Mono mix. But if the Mono mix is edited, the edits are not apparent.

Ask Me Why. This is a different matter entirely. Lewisohn cited two Mono mixes, one created November 30, 1962, the other on February 25, 1963. Barrett's notes show a Mono mix only for February 25. Winn commented on Barrett by controverting the physical evidence and attributing Mono mixes for both dates, agreeing with Lewisohn. However, in Way Beyond Compare, Winn scoffs at the idea of two Mono mixes, using for reasoning that "Ask Me Why" sounds no different on the UK 45 than on the Mono Please Please Me album. Yet, we know this reasoning is incorrect since the UK 45 is a "dry" release while "Ask Me Why" on the the LP is "wet" (more on this: here). But I cannot say if the existence of "dry" and "wet" releases constitutes two separate mixes or simply two different masters of the same mix. Nevertheless, the evidence points to two Mono mixes.

After Mono mixing was completed on November 30, certain of the engineering team sent a copy of the tape to Decca’s Dick Rowe (1962, January 1), hoping he would not know it was The Beatles and would reject them again!

Acetates. Apparently, acetates were also cut, as the following photos seem to indicate: 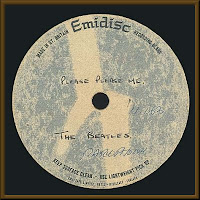 (above) Acetate of the “Please Please Me” Mono mix. Ref: here. 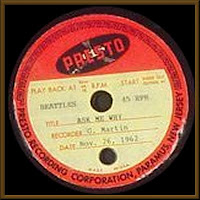 (above) Acetate for “Ask Me Why,” possibly the Mono mix. Ref: here.

*Many consider Record Retailer (not Melody Maker) the "official" chart, on which "Please Please Me" only reached #2.

Please Please Me. One of the keys to deciphering the Stereo mix of "Please Please Me" lies in the fact that it stinks (even if you think it's "charming"). The idea that George Martin could produce no better is not acceptable nor logical. Unlike "Love Me Do" and "P.S. I Love You," twin-tracks for "Please Please Me" (EMI reel E48382*) existed on February 25. It is therefore incomprehensible that Martin chose a different and inferior take as the basis for the Stereo mix. On the vocal track of this inferior take, not only does John make an obvious lyrical error in the final verse (singing "Why do I never even try, girl" instead of the proper "I know you never even try, girl"), but Paul makes a similar mistake in the first verse. On the instrumental track, there are a few subtle omissions or faults, compared to the Mono mix. The question here is, Why didn't Martin use the "best" take, the one chosen for the Mono mix? Even if Martin thought it flawed, he couldn't possibly have believed the one chosen for the Stereo mix to be superior.

* Sulpy, in the 1st edition of the 910 Guide to the Beatles Outtakes, theorized that this reel may be in the hands of a collector.

Concerning the harmonica overdubs on the Stereo mix, these are terrible also. If the twin-tracks were available, there is no reason to believe that the original harmonica overdubs (Takes 16, 17, and 18, most likely) were not on the same reel, and yet Martin utilized a different strategy. Steve Hoffman wrote (here): "The way it was explained to me by George Martin in 1976 was that the Stereo mix was created from the best take of the twin-track, and they had to dub the harmonica in by dubbing the segment with the ENTIRE MONO SONG by using the Mono tape which already included a funky dubbed harmonica. In other words, there is double everything in the Stereo mouth organ parts" (for the sake of concordance, I removed the section of Hoffman's quote which claims the Mono 45 to be edited). Whether or not Martin and/or Hoffman have been accurate, this anecdote is not exactly true, since the Stereo mix does not use the "best" take of the twin-track. Furthermore, it is a bit misleading, since not "everything" is doubled at the harmonica overdubs (the harmonica is not doubled!). Winn noted the inferiority of the chosen twin-track take, while agreeing that Martin "did a tape-to-tape copy, adding in the harmonica phrases directly from the Mono mix and feeding the new sound to the vocal track." Sulpy came to a different conclusion, that "Martin was a little sloppy when it came time to do the Stereo remix, and did not match the edits that he had used for the Mono." This presupposes that the Mono and Stereo mixes use the same "best" take as a foundation, which is untrue. The question here is, Why did Martin use the Mono mix, rather than the original harmonica takes, for overdubs? We can't use for an excuse that the reel was missing or damaged, since Lewisohn and Barrett both noted the Stereo mix of "Please Please Me" to be an edit of Takes 16, 17, and 18, a declaration that the parts in question were present and in good condition.

Now, if Lewisohn and Barrett have it right (and I don't believe this powerhouse tandem can on this point be rejected), one of those three takes must constitute the inferior twin-track take used for the foundation of the Stereo mix, since the instrumental track of that mix has no edits. Assuming Take 16 to be the foundation, what roles did Takes 17 and 18 play? Have they not already been labeled harmonica overdub takes? Were they not all twin-track takes? Yet, the conundrum is that the Stereo mix is an entirely different product than should be expected from a combination of those three takes. Furthermore, if Take 16 is the inferior twin-track take, which take was used for the Mono mix? If Take 16 was not the "best" take, why was it used? If Take 16 was the "best" take, why is the Stereo mix different than the Mono mix? I think there is no solution to this puzzle which suits me. Even though documentation from Lewisohn and Barrett indicate that the expected resources (Takes 16, 17, and 18) were used, the final result is a different story, neither matching those resources nor making sense in their usage.

Finally, this: assuming he edited together reels, why did George Martin do it this way? Why did he not rather have John (who was still in England at the time, touring) come back to Abbey Road for a short session to re-do the harmonica overdubs? Did Martin think he was saving time or money? I actually have no theory on this.