It is believed that, shortly after the official rejection by Decca (1962, January 1), Beatles manager Brian Epstein met with Parlophone Records producer George Martin. At this meeting (commonly cited to have taken place on February 13), Martin agreed, on the strength of the Decca tape which Brian held, to give The Beatles an audition. But three days earlier, on February 10, 1962, Brian had already posted a letter to Dick Rowe (Decca), stating that The Beatles had received a recording contract offer1. Certainly, this was not the case, because (according to history) no other record company had shown an interest in the band. However, we can believe that by February 10 Martin had at least arranged this first meeting with Brian. Thus, Brian, with barely a sliver of hope, told Dick Rowe to shove off, a bold and exciting move.

Brian and George Martin must have hit it off quite well, for Brian felt sufficiently boosted to send a letter on February 20 to Bert Kaempfert, the Hamburg producer, asking that The Beatles be released from their commitment to record again with Tony Sheridan1, and it would seem unlikely that a chance with Polydor Records should be dismissed so easily if Brian's faith in George Martin was not strong. Nevertheless, Martin later wrote that he most certainly would not have offered The Beatles a recording contract before an audition2. Therefore, it seems that Brian was continuing his boldness, believing firmly that, once Martin heard the lads live, a contract was forthcoming.

The audition with Martin took place, at the earliest, in March of 19622. Apparently, it went quite well, since Brian sent another letter to Bert Kaempfert, on March 27, 19621, requesting that The Beatles' contract with Polydor be terminated, after the conclusion of their responsibility, on June 30 of that year. We should think that Brian was steering a strange career move if Martin, on behalf of EMI and Parlophone Records, had not made a strong offer; and Brian’s letter stated as much, that The Beatles would be recording with Parlophone on their return from Hamburg, indicating that some form of negotiation had taken place. Nevertheless, it is a fact that Martin did not make that dream come true until May 9, 19622, for that is the date Brian sent a congratulatory telegram to the boys (who were at the time performing in Hamburg), and another telegram to Bill Harry at Mersey Beat, announcing the Beatles' "secured contract" and "first recording date”1. Again, we must conclude that Brian’s faith and enthusiasm were ahead of reality.

This time, however, it was for real. On May 18, 1962, George Martin put in for the standard Application for Artiste Contract, which was prepared by the record company on May 24, and returned signed by Brian Epstein by June 4 or 51, 2.

Living only on hopes and prayers, burning bridges while crossing over canyons with eyes closed, Brian in the end was proved right. It was a classic case of visualizing one's future and then making it happen. How else do we explain his continuous confidence?

June 6, 1962 was an actual Beatles recording session. Lewisohn, however, regarded this date as a kind of audition (a “test” session), and estimated the signed contract as not legally binding, requiring at some future time an EMI counter-signature, which would not be requested by George Martin until he was satisfied that the band met his standards3. But if this were true, why, on June 26, did Ron (R.N.) White, General Marketing Manager for EMI, send a letter to Brian, acknowledging The Beatles’ valid contract1? Did Martin send the contract for that counter-signature sometime after June 6 but before June 26? There is no evidence for this, except conjecture on the part of Lewisohn4 and others. June 6 was never an audition, but the first date of “artist development,” which concept can be seen through the events of summer and fall, 1962.

The recording session itself was stressful. Paul later noted that they were especially worried about one song, "Besame Mucho." The Beatles were "starting a reputation" and wanted to be "careful as to what we do" in order to "keep our integrity with all the lads in Liverpool." They didn't want everyone back home to think they'd "gone soppy”5. “Besame Mucho” was nevertheless the first song taped.

For the recording session, George Martin’s assistant Ron Richards was by Martin assigned to be producer while the boss attended to other business (this by itself underscores that The Beatles were not there for a test, but for artist development). However, during the taping of "Love Me Do” (the second song) Richards was suitably impressed to call Martin in for a listen4 (which indicates that Richards was in “producer development”).

At the time George Martin began working with “Love Me Do”4 (some references say before any recording began), The Beatles were given a lecture (an orientation, if you will) by Martin, Ron Richards, and Norman Smith (the recording engineer), detailing many the rights and wrongs, whys and wherefores, of the music business. At the end, Martin asked them, “Now, is there anything you don't like?" After a short silence, George Harrison piped up, "Well, for a start, I don't like your tie”6. Thus was born the affable relationship between Goons humor (Martin produced Dudley Moore and Peter Cook) and Liverpudlian dry wit.

According to John Barrett, this day’s session was recorded to EMI reel E47052 as twin-track Stereo, mixed (probably straight) to Mono. Also on this reel were “P.S. I Love You” and “Ask Me Why,” recorded third and fourth, respectively. See in color: here.

After the session was complete, The Beatles, according to a letter from Brian Epstein to EMI’s Ron White, dated June 29, 19621, expected to record again “towards the end of August,” for the purpose of making their “first disc.” This should not be taken to imply that June 6 was an audition, but that it was (generally speaking) a failure in that no performance from the session was deemed suitable for release. Brian, not willing to admit this failure, likely viewed June 6 as a warm-up. In his letter, Brian also mentioned that he hadn’t heard from George Martin “lately,” but this should not be construed to mean that Martin was tempted to renege on their contract, nor even that he was disinterested in the band; it was merely Brian’s nerves taking hold.

It was for a long time believed that all four songs recorded this day were completely lost. However, Beatles luck won out when “Besame Mucho” and “Love Me Do” were discovered in two separate miracles. “Besame Mucho” was found in late 1983 or early 1984 on a “private reel,” reportedly somewhere in the Far East. The 1983/1984 dating is derived by noting that the track was not included in the “Abbey Road Show” private tour (July 1983), but was, however, edited by Barrett (July 1984) for the aborted Sessions LP (slated for 1985 release but withheld due to legal wrangles). Sometime thereafter (possibly 1994), Judy Martin (George's wife) came across an acetate disc of "Love Me Do" at the back of a Martin residence closet. The Anthology video claimed, however, that it came from a “private reel” (probably a mix-up with “Besame Mucho”), while Miles and Badman, in Beatles Diary Vol. 2 (2001), wrote that both “Besame Mucho” and “Love Me Do” were found by Judy Martin in the back of a “cupboard.”

Neither of these performances should be considered a Variation since they are in the realm of outtakes.

Though quashed, test pressings for Sessions had been cut. When the legitimate release was thwarted, these test pressings were quickly leaked (or stolen) and bootlegged (first as Sessions with a fake EMI label), and thus "Besame Mucho" from this date made its public debut.

Widely recommended for this track is the bootleg Ultra Rare Trax 1. But I do not recommend it. First, a digital copy I heard had what sounded like surface crud from ancient vinyl. Listening to vinyl for URT 1 (Drexel 1988) in hopes of some improvement, the sound was nevertheless the same. Reaching further back, I tested Sessions vinyl (fake EMI 1985). Identical. I then listened to Unsurpassed Masters 1 (Yellow Dog), and it is a vast improvement from a noise standpoint. 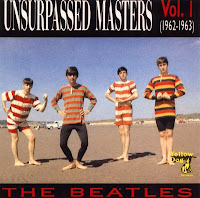 The performance on Anthology 1 has noticeable noise reduction and sibilance, so I don't recommend it. Now, Purple Chick wrote in the documentation for I Hope We Passed the Audition (detailed information on this boot: here) that they used URT1 for the basis, but clearly "Besame Mucho" on Chick's collection is straight from Anthology.

The boot Artifacts 2, disc 1 presents the URT1 track in Mock-Stereo.

Note that all of these sources incorporate a loop edit for the final line (repeat on the fade-out), which edit, according to Brennan, was probably done for Sessions. But Winn noted that an earlier version, without this edit, circulates among collectors (although at the time of publication this version was unbootlegged).

"Love Me Do" from this session was first released on Anthology 1 (the only current root source), but it's found on a variety of bootlegs also.

Email ThisBlogThis!Share to TwitterShare to FacebookShare to Pinterest
Labels: 1962, besame, love me do